Audio on the 50 Yard Line 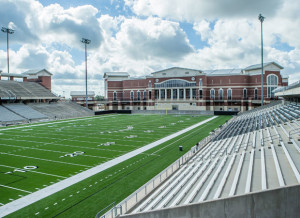 The Super Bowl is no doubt one of the biggest watched events across the nation. I’m not a fan of the sport but you betcha I’m there watching at someone’s Super Bowl party for three reasons. The food, spending time with friends and family and the halftime show. No matter who is playing and performing that night, I’ll be there to watch. As a child, I thought it would be the coolest thing ever to be a part of a major production like the Super Bowl. Doing audio, doing some cool stage designing or calling the shots that go live to all the viewers out there watching.

Now I am working within a venue that gives me the opportunity to be apart of large productions (not as big as the Super Bowl) but each day is something new. One aspect of my job that was very new when I began working within this venue was heading audio in a stadium setting. High school football is a big deal to everyone here in Texas and at one of the biggest stadiums in the state, we like to do things big. College and professional leagues aren’t the only ones putting together big games and housing big crowds.

At Cy-Fair FCU stadium we can house 11,000 people at a time. All the district games and homecomings are showcased here along with the battle of the marching bands and activities like such. Being in the profession of audio can lead you many different ways. I want to share my experience heading audio on the field. There are a lot of challenges that are faced.

When mixing a choir down on the field for a national anthem or a production for homecoming, my best friends are my cans (headphones). This way I get a solid mix out to my house, I then set a proper mix for my choir monitor that lives right in front of them during the performance. This helps keep the focus off the delay that is accruing. Another thing that makes it extremely challenging is wind. If it’s a windy day I have sound flying every which way. Not only is sound being bounced around. I have wind hitting my microphones pretty hard which causes dropouts from time to time. On days like these, I use a gate to try and control when my mic’s open and close to catch the performance only with minimum dropouts and the loud howl of high winds.

Another major part of audio during the games is the Referee microphone. The red is equipped with a headset- countryman styled mic with a bodypack each game. Connected to his headpiece and the bodypack is an in-line mute switch that allows the Ref to open and close his mic as needed, this takes some of the stress of your back by not having to mute the mic during actual playtime. You still have to pay attention and listen because sometimes a Ref will forget to cut their mic after a call and it’s on you to cut any unwanted chatter into the stadium.

Lastly, running audio from the press box is the most difficult to me. One, I can turn my monitoring system up in the booth, but I don’t know what it sounds like in the stands. Sometimes I have to rely on my camera op’s to communicate with me and let me know if we need more or less volume in the house. The other option I have is to use an app to control my audio surface, which is most efficient when time allows.

I know us Soundgirls are working in all areas involving audio. But if any of you specifically want to get into sporting events, or have experience within the sporting side of things. I would love to hear how you specifically deal with challenges. I’ve headed audio for final four basketball events, slam dunk contest and nothing has challenged me more than audio out on the field. Your challenges might be different than mine, maybe you’ve done gigs outside that weren’t sporting events. I would still love to hear how you deal with different weather conditions. The thing that drew me to this platform is the same thing that keeps me here. Being able to share experiences, learn and grow together. I can’t wait to hear from you all.

About Alesia: Alesia Hendley is an AV professional that found her passion at a young age as a sound engineer with her Father’s church. In the early stages of the church’s foundation, they couldn’t afford musicians. By utilizing audio and technology she and her Father found creative ways to go higher both musically and spiritually, taking the congregation with them. Now you can find her operating/installing audiovisual systems or executing creative ventures. As a young professional she’s finding ways to bring AV, creatives, and creative visions together in the effort to leave her mark by making an impact and not just an impression.

Brace Yourself
Dealing with the Unexpected – A Cancelled Show.