I’m currently mixing FOH on the Goo Goo Dolls “The Otis Midnight Sessions” acoustic tour.
When most people hear “Acoustic Tour” they expect a couple of musicians walking in with acoustic guitars on their backs, playing campfire songs. I have yet to do an acoustic tour like that. When I toured with Indigo Girls years ago, I cannot tell you how many times we showed up with our truck full of gear to the local crew shaking their heads asking “ I thought this was two girls and two guitars?” In fact it was 20+ various stringed instruments. Advancing audio for local production dates was always a challenge because production people couldn’t fathom why I would need 32 inputs for ‘two girls and two guitars’. It was only two girls and two guitars at one time, but those 20+ stringed instruments encompassed various acoustic guitars, mandolins, banjos, dulcimer, dobro, etc…each with it’s own input.

I’ve been mixing the Goo Goo Dolls since last October and for this acoustic tour, my 47 inputs from our ‘rock’ show is only scaling back to 41 inputs.  Along with new arrangements for most songs, we are adding six more musicians.  They are dropping electric guitars, 4 keyboard lines, a Bass distortion input, and adding 3 background vocals, 2 violins, another acoustic guitar, cajon, percussion, toy piano, harmonium, glockenspiel, and accordion. 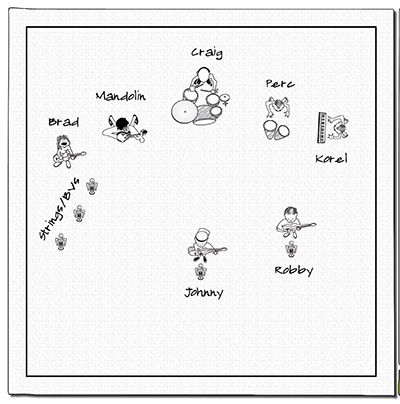 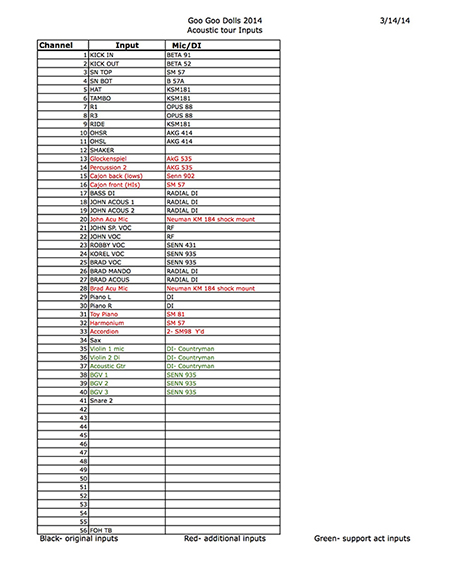 Since October, I have been bouncing back and forth between a Midas Heritage 3000 and a Midas Pro 9 at FOH. If you know me or have read my previous blog, you know I love my analog. The Pro 9 came about in December when we were doing a Rock Cruise and could not take the H3000 due to space issues on the boat. After the December leg of the tour I went back to the H3000 for our Canadian run. During that tour is when we started talking about the acoustic set up. The band had never done this before and were still unsure of what the exact configuration of extra musicians would be and how and where they would be incorporated into the set.

I needed to get an audio spec to Clair Audio, our vendor, but knew the band wasn’t going to be able to settle on a final input list until rehearsal, at which point would be too late. So, I did my best to estimate what I would need. I planned for the inputs I knew about and a few surprises, trying to cover all the bases. Since I started with GGD they have been carrying a everything except PA. For the acoustic tour we would be playing very small intimate venues, most places being between 600-800 seats, significantly smaller than what they normally do. FOH space will be very tight in some of these places, too small for the Midas H3000 and racks of outboard gear. Knowing this, I go back to the Pro 9. Along with doing the acoustic tour, we have a handful of our rock shows scattered throughout the tour, two of them with a substitute drummer. With all of the changes and comings and goings over the next five weeks, going to digital makes the most sense. At this point I am also wrestling with the decision to keep the Pro 9 throughout our summer shed tour. I love my analog but I have to admit, though I rarely use snapshots the GGD show definitely makes the case for it. The show is very fast paced with little time between songs. There are various instrument changes through the set and John plays 13 different acoustic guitars in 15 different tunings throughout the set. All of his guitars come down two lines to me and (more on that later) and they all sound very different, requiring me to re-EQ for each song. Up until now I’ve been doing it manually on the H3000 but that along with effects changes, and all the other things I need to change from song to song would be incredibly easier with automation. I decide to keep the Pro 9 for the summer.

Rehearsal Day 1
This is the first rehearsal I’ve had with GGD since I began working for them. They aren’t fond of rehearsing or sound checks, so my very first day consisted of a barely three song sound check which also doubled as ‘rehearsal’, on the first day of our UK tour last year. These three days of rehearsal are a luxury.

I’m set up in a little office about the size of a closet, outside the main rehearsal room. Here I can be isolated from the band. I’ve got my console, rack, and two EV speakers on sticks. Luckily there is a large window which allows me to see into the rehearsal room when it’s door is propped open. 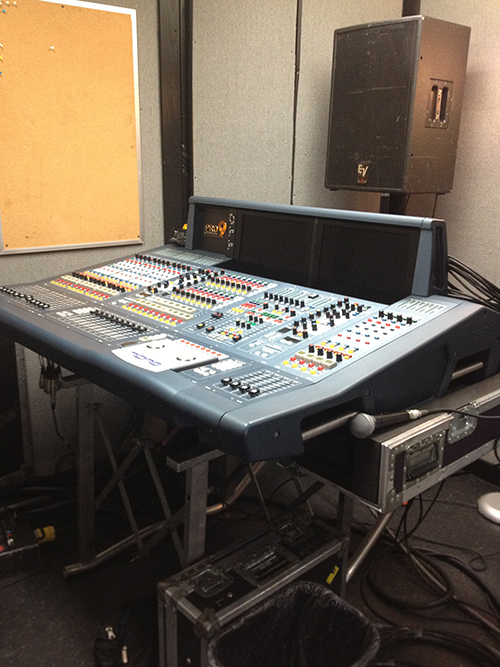 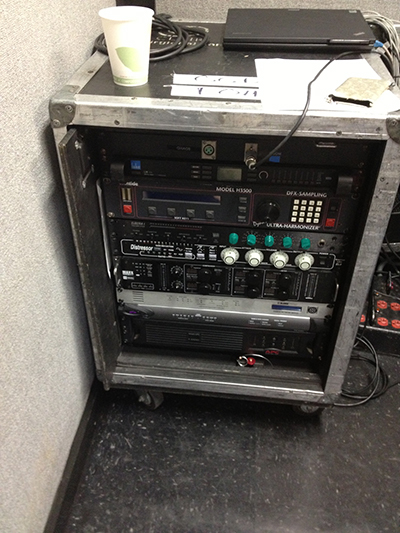 I’m running AES out of the Console into the Lake, which I will use for a system EQ everyday. I requested the surface IOs on the Pro 9 to be one analog in, one analog out and one AES IO. This is different from my previous set up so I need to make the necessary adjustments. I’m not completely proficient on the ins and outs of this desk yet. I can get around just fine for mixing, but configuring it is another story. It takes a bit but I finally get everything set properly.

We spend the first several hours of the day getting everything set up and bringing our new audio tech up to speed since this is his first tour with us.  I spend some time trying to work out a plan for file management of the three different shows we’ll be doing:  Rock show with regular drummer, Rock show with substitute drummer, and Acoustic show.  All three have different input lists.  We are handling the support act ( who are also the additional musicians for our acoustic show) on our consoles as well.  Nether the monitor engineer or I have enough inputs to patch the additional inputs needed for their set into our current input list so we’ve decided the easiest way to handle this is to bring out another J Box (what Clair calls their splitter) 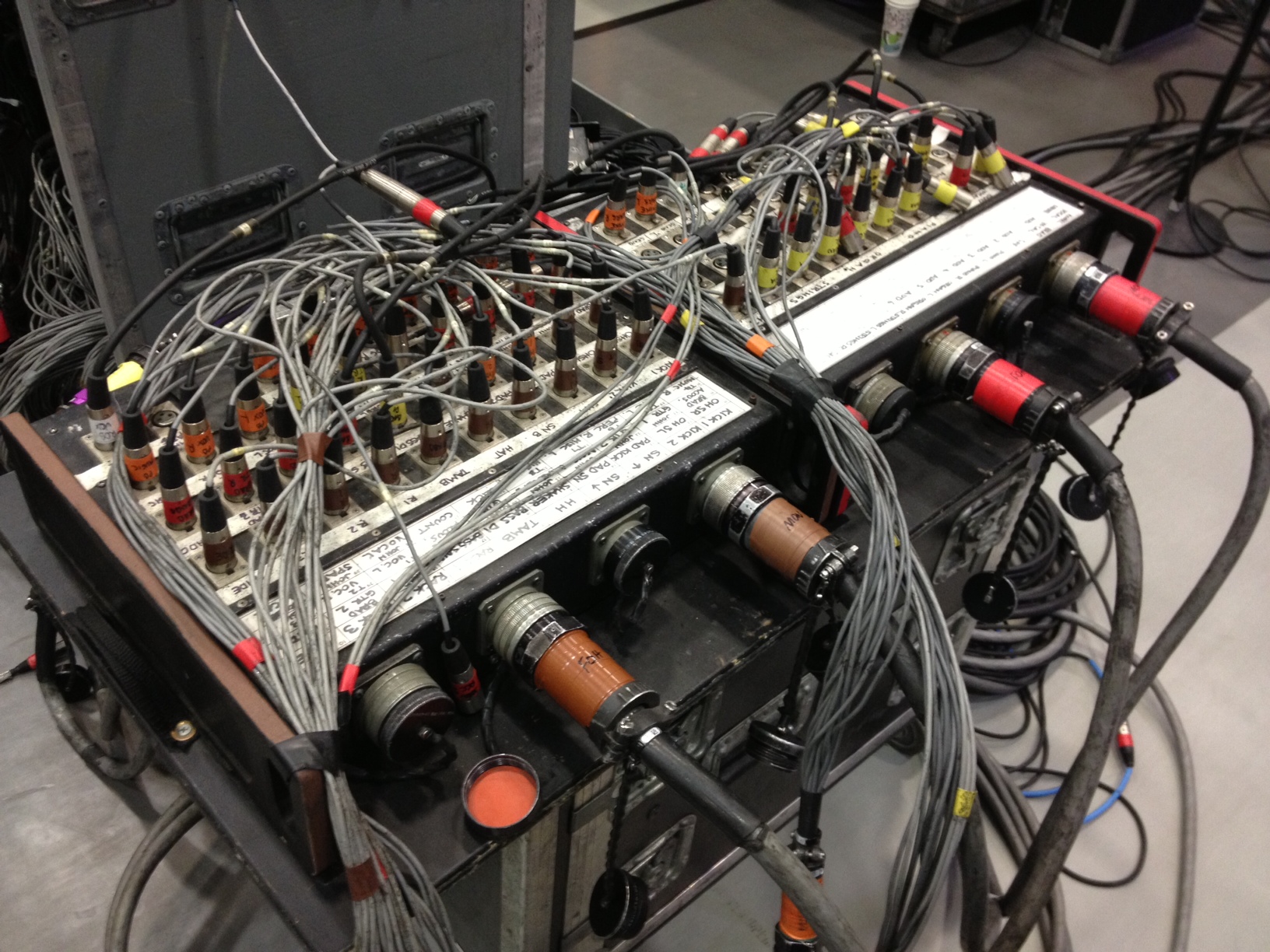 This will stay patched with their inputs while our two stay patched for our set and we have an additional two patched for the rock tour.  All we need to do between the support act set and ours is swap the NC40 snakes between J Boxes and we’re ready to go.  This also makes it incredibly easy to alternate between acoustic show days and rock show days.  All inputs stay patched in their J Boxes and the sub snakes are just connected to the fan ins each day which is a huge time saver.

The band arrives in the late afternoon for a rehearsal with the substitute drummer. One run through of the set and that’s it. It’s a bit of a scramble but I get what I need and we strike all the backline to reset for the acoustic rehearsal tomorrow.

Day 2 Acoustic Rehearsal
Backline loads in and sets up for the acoustic set and after I see what we’ve got, I revise the input list. There are a lot of questions that will have to be answered when the band arrives. I start a new show file for the acoustic tour which contains a new input patch and a new system patch. As band members start to arrive and make changes we are on to revision three of the input list. As rehearsal days go, we are short on time and do not have a chance to do a full line check before the band is ready to start. We manage to check the strings, percussion, and new vocals. Just before we start a run through, I’m told that I need to record it so it can be given to our LD tonight for him to start programming. Since we haven’t had time to do a line check and this is the first time I am hearing any of this, I won’t have a mix going until I have a chance to dial things in- I have to use this time to dial in my individual inputs as well as sort out effects and dynamics. I’m only going to get one run through tonight and, if I’m lucky, another tomorrow. I quickly dial up an aux mix of all inputs pre fade and send it to two channels in our Pro Tools recording rig. It’s not ideal, since every mic and input will be sending to the record feed, at all times.  There will be a lot of open mics with nothing but stage volume going through them. Best I can do on short notice. I’ll apologize to the LD later when I see him. The band starts running through the set, rehearsing only the songs that feature our additional musicians.  I have never heard any of these songs before.  So, between dialing in my inputs, I am making notes as to who is playing what instruments, roughing in some effect settings and just trying to learn the songs. We finish around 8:30 pm.