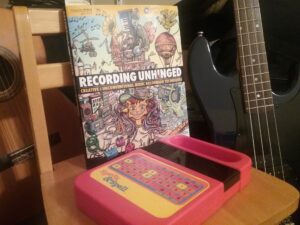 If you ever need a feel-good audio extravaganza, pick up a copy of Recording Unhinged: Creative & Unconventional Music Recording Techniques by Sylvia Massy with her partner Chris Johnson.  As cacophonous as its cover, illustrated by the renaissance woman herself, this title explores the rule-breaking philosophy behind many iconic albums.  The subtitle says it all.  Readers be warned this is no cookbook of precisely measured formulas of gear and settings.  Think of it as a grab bag of inspiration, a light for dark places when all other lights go out.  A tool to break out of the worst ruts.

Divided into chapters by instrument, similar to a session in your current DAW, Massy fills each chapter with audio legends telling audio lore.  Some of the stories are so fantastic, that they will never be attempted again, but many of the anecdotes are exercises in “why not?” and “I hope this works.”  Emphasis is placed on the latter, with many memories featuring antique one-of-a-kind microphones and synths one burnt fuse from the dumpster.  It becomes a running theme to embrace the problematic gear as a challenge to occupy the brain so that the heart is free to ace the take.  Mistakes are not the apocalypse, instead, they are the sources of epic sagas.  Here is your permission to try the weird and possibly wonderful.  On one hand, this reduces the anxiety of a perfect session for a star client, on the other hand, it could be a recipe for wasted time.  Sylvia Massy documents those moments too.  Sometimes even the pros are just making it up as they go.

The stories alone would be enough to pick up a copy, the icing on the cake is the candid stills, and illustrations drawn by Sylvia.  Behind the scenes polaroids, and photos of iconic music history make this a coffee table book of envy.  And each illustration is as wild as the stories.  I am not entirely sure, but the chapter plates might be a Where’s Waldo of audio memes. 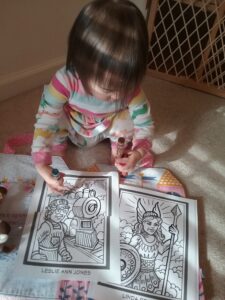 While Recording Unhinged stands alone, it pairs well with the PBS documentary series Soundbreaking, which follows a similar format and shares some of the same cast of characters.  For those needing more of Sylvia’s illustrations: there are two companion coloring books.  The first with a showcase reel of drawings from Recording Unhinged and the other focusing on audio icons in a Catholic saint fashion.  My co-reviewer has finally figured out which end of the crayon to use and ate it up (still hasn’t kicked her paper habit).  I love these add-ons, they are perfect for musicians waiting between takes or for decorating dorm room studios.  One word of caution to the audio parent:  some illustrations include sex, drugs, and rock & roll, use your discretion.

Nerd, as I am, I could not put this book down.  And it deserves a re-read with a soundtrack to unpack each morsel.  I would not recommend this as the only book on recording, but as a supplement to your current library.  A secret weapon to get your mixing on the next level.  Maybe put it in your laptop bag to infuse its funk in your sessions.  You never know what might happen.

You can check out this book in The SoundGirls Lending Library