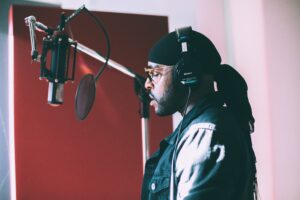 I’ve read a lot of articles entitled something like “tricks for recording stellar vocals” or something along those lines, as I’m sure you have as well. I stopped reading them a while ago because they were all saying the same thing; what preamps to use, the best vocal mic, mic placement, acoustic space treatment, mic technique, etc. rather than addressing what I think is the most important element: getting the best emotional, confident and believable performance out of your vocalists! As important as the equipment and recording techniques are, what good does it do if the singer has not given their best performance? I know you already knew that. But what you might not know is that you, as the engineer and/or producer, can absolutely make or break the emotion/mental state of the singer in your studio.

Here’s the thing. Most singers are incredibly nervous or at the very least, a bit anxious when they come to record vocals. They usually have inner demons waiting to hammer them with all the worst words of self-doubt a demon can muster just as soon as they open their mouths. Your singers will love working with you if you can put them at ease in every way possible. What it comes down to is you need to wear other hats besides just “engineer” and “producer”. You must also be a therapist, life coach, cheerleader, BFF, and psychic.

Now, you can complain all day long that singers need to be professional and just deal with the stress and blah blah blah. But have you not figured out that the vocals are the most important part of the song? It doesn’t matter if you have the best drum sounds on the planet or the coolest guitar solo ever created. If the vocal falls flat, the song will not connect with people.

Do you want your singer (whether they are Kelly Clarkson good or not) to give the best vocal performance of their life in your recording session? Do you??? Yes. I know you do! So shift your mindset from being the dude/dudette at the console to being the singer’s advocate. Here is my list of the top eleven things you must do to get the best vocal performance from your singer ever.

***A word about auto-tune – The use of some type of tuning plug-in has become the industry standard, whether you like it or not. The problem is that the music we hear on our streaming playlists is littered with singers that sing un-humanly-possibly pitch-perfect. For your mix to stand scrutiny next to Selena Gomez and Shawn Mendez mixes, auto-tune must be used. It is not just about perfecting pitch within an inch of it’s life but it is a processing effect that listeners, without realizing it, expect to hear on polished productions. Expecting a singer to sing as perfectly as the pop music coming from major labels is like expecting a model to walk into a photoshoot “photoshop perfect”. “Why do you have blemishes and scars? I don’t see those on any of the models in the Victoria Secret catalog.”

Not all productions call for the tightest auto-tune you can get, however. This is where you as the producer of the vocals must know the genre you are working in and stay true to that genre. I think of it on a scale of 1 to 10. Adele, as far as I can tell uses no to very little auto-tune (because she’s pretty pitchy haha). Similarly, some genres such as indie rock or alt-rock (think of Brandon Flowers from The Killers or Dan Reynolds from Imagine Dragons) require the singer to have some natural imperfections to keep the raw, emotional element of the song. You’d better believe their backing vocals are pitched, however. So if you’ve got a more soulful singer in a genre that is more forgiving of that effect, then keep the pitching loose and natural. If you are aiming for a hit song on the charts, you must learn how to massage auto-tune to where the singer still sounds “natural” (meaning, not robotic like T-Pain) but has no pitch imperfections.

There you have it! I hope you can all become the singer’s favorite recording engineer by being their advocate in the studio. You’ll both benefit when the end product is something you can both be proud of!

Becky Willard is a Warm Audio featured artist, a music producer, recording engineer, songwriter, composer, vocalist and mentor. She began working with artists almost 30 years ago as a vocal and songwriting coach.  It was a natural transition from coach to producer as she guided singers searching for their sound and began recording them in her home studio.

In 2010, Becky founded Vox Fox Studios and has become the go-to producer for many Utah artists as well as artists from all over the world. These artists go to Becky to produce their music because they know they will get their best vocal performances, modern production sounds and mixes that are “radio-ready”.  As a songwriter herself and session vocalist, her songs and voice can be heard in dozens of TV shows and movies. As a woman in a male-dominated field, Becky is actively engaged in educating and inspiring young women in her community and worldwide to pursue music production and engineering.