SoundGirls is dedicated to assisting members with scholarships to other educational institutions, the FAFSA, resumes, and CVS. We do not want language and grammar to be a barrier in applying for scholarships, financial aid, and employment opportunities.

This service is made available by Sammy Keyes-Levine you can reach her at Spkeyeslevine@gmail.com

Grammar is arbitrary, and I will fight anyone who argues otherwise. Well, grammar in the sense that most people know it as is, anyway. Essentially if you are able to communicate with others and people are able to understand you, your grammar is perfect. Within written grammar this idea is more complicated, and if you want to know the history as to why we write the way we write please ask me because I would love to talk about it, and it’s a wild ride, I promise. But in essence, there was a need to communicate through the written word across farther distances and across separate languages, so we needed to create an agreed upon standard, which we did. Of course, the standard agreed upon was that of upper class white men, and everyone else was expected just to follow that. And then a bunch of stuff happened that changed our language (one of them being the Great Vowel Shift which is simply one of my favorite things), which is completely normal and has been occurring since the beginning and is still occurring today (really think about how you pronounce ‘cat’’ and where the [t] actually comes into play), but for the most part we stuck with our standard. Written language and spelling are at times somewhat logical but more often than not completely irrelevant to how we would communicate in person today, which means that it’s mostly a lot of memorization and bullshit. Some languages have less of a differential than English in this regard (such as Spanish), while some have even more, and it’s a bit of a mixed bag.

All this to say, if your written grammar is not the standard accepted grammar, my fun fact for you is congrats on not spending a ton of your life working towards the mastery of this arbitrary made up thing that truly is one of the least sensical things I have ever seen. This is especially prevalent in speakers of English as a second language, which to you I say, you know a whole other language on top of English and anyone who tries to come at you about your ‘incorrect’ grammar can fuck right off. Unfortunately, it’s a very easy thing for people to dismiss you on. Which is also an extremely discriminatory tactic, even if the people doing it don’t realize it as such. If you can’t spell, you’re “lazy” or “dumb” or whatever mean fucked up shit people want to say. Fortunately, this is 100 percent inaccurate and often discriminatory and the reality is they really just don’t fundamentally grasp how language works. Unfortunately, this can create very real barriers.

So first off, I just want to say if you cannot spell or write with the standard English grammar it really doesn’t matter. But I want to provide help that has been formed by my privilege of going to a four year university and studying both Linguistics and English to ensure that the arbitrary standard does not bar anyone from accessing resources. So, to anyone applying for scholarships, the FASFA, resumes, or really anything that you feel might benefit from a human grammar checker, please send your documents to me and I will help you edit them to adhere to the written English standard for free. If you want a more in-depth editing process I am also happy to do so and will offer those services on a sliding scale which can be discussed.

Bachelor of Arts Degree in Linguistics and English 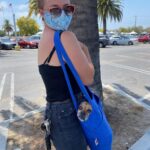 Sammy is a recent graduate from the University of California, Berkeley, where she majored in Linguistics and English. She currently works for SoundTools, manufacturing products and any other odd jobs they want her to do. While at college she also did sound and patching for multiple runs of the Warped Tour, and some other sound gigs, and is planning on getting a Master’s Degree in Speech Pathology in the future.