Join SoundGirls and Women Who Are Sound for a webinar on

Moderated by Leslie Gaston-Bird author of the book, “Women in Audio”, Governor-at-Large for the Audio Engineering Society, and Chair of the AES Diversity and Inclusion Committee. She is also a freelance re-recording mixer and sound editor, and owner of Mix Messiah Productions. She has a Heartland Emmy nomination for the film “Enough White Teacups”, directed by Michelle Carpenter.

Ai-Ling Lee was born in Singapore where she studied music audio engineering. After two years of mixing and editing commercials and music, she moved to Los Angeles in 1998 to pursue a career in sound design for feature films. Since then she has worked as a sound designer, re-recording mixer, and sound supervisor on a variety of films including Jojo Rabbit, La La Land, First Man, Deadpool, Wild, Spider-Man 2 (Sam Raimi) and Buena Vista Social Club. Ai-Ling has had the opportunity to work with directors Damien Chazelle, Taika Waititi, Jean-Mar Valée, Noah Hawly, Wess Ball, Cameron Crowe, Gus Van Sant, and Sam Raimi, to name a few.

Paula Fairfield is an International and Emmy award-winning sound designer for tv, film, commercials, and basically anything that makes noise. She has 10 Emmy nominations with two wins for her work on Game of Thrones, along with multiple wins and nominations for her work in both The US and Canada. During her career, she has had the privilege of working on tv projects such as the iconic “LOST” and visionary filmmakers like Robert Rodriguez, Brian DePalma, Paul McGuigan, and Darren Aronofsky. 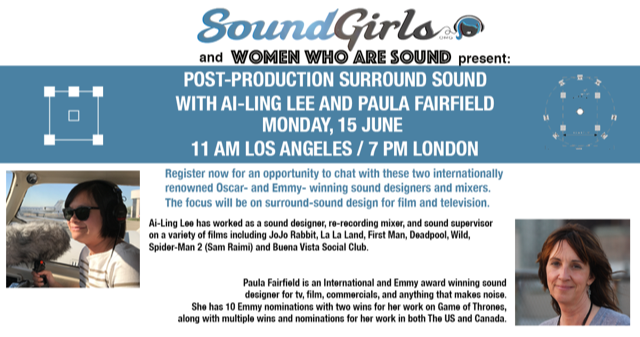