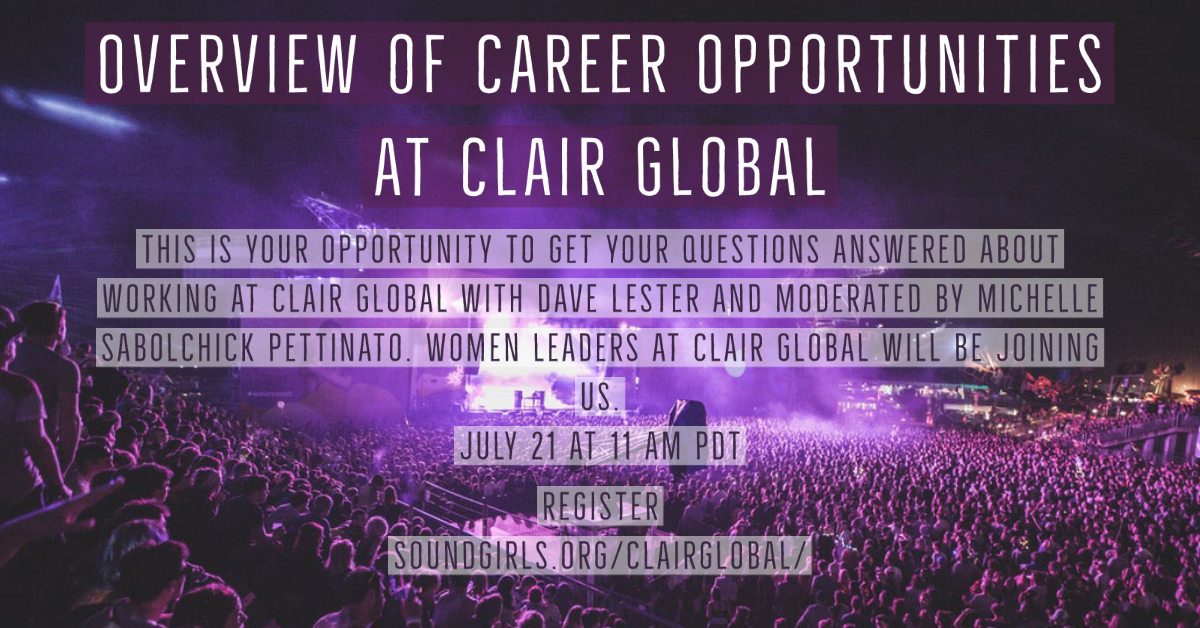 Clair Global’s history in the live events and permanent installation industries influences a culture of incredibly hard-working professionals ready to solve the next impossible problem.

Clair strives to exceed expectations through integrity, innovation, attention to detail, and unyielding customer service worldwide. Extraordinary employees are our differentiator. Our employees’ creativity, talents, problem-solving skills and commitment to service set us apart. You don’t join the Clair team to just work, you join the Clair team to realize your life’s work. Every event, every product, every promise has our team imprint on it. Put simply, we care.

July 21 at 11 AM PDT – Register and Post Questions Here

Michelle Sabolchick Pettinato began working in live sound in the late 1980s and has spent most of the past 30 years as a full time touring FOH Engineer for major label artists including Elvis Costello, Gwen Stefani, Janet Jackson, Goo Goo Dolls, Melissa Etheridge, Jewel, Kesha, Styx, Mr Big and many more.   Michelle has extensive experience mixing in venues of all shapes and sizes, from clubs to stadiums, as well as major music festivals from Download to Coachella.  She has also supervised and mixed live performances on a wide variety of television from SNL to the Grammys.

Michelle is co-founder of Soundgirls, a Full Sail University Hall of Fame inductee, and creator of MixingMusicLive.com where she teaches an intro to live sound and mixing.  She is an active mentor and coach to those seeking a career in Live Sound and Music Production and is frequently sought out as a panelist and guest speaker for industry conferences and universities.